The Career Profiles in Linguistics section regularly highlights career paths taken by linguists. If you would like to recommend someone (including yourself) for a future profile, please contact Career Linguist. 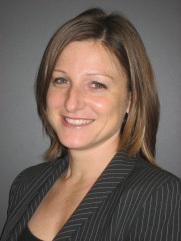 Sara McElmurry is the Assistant Director for the Immigration Initiative at The Chicago Council on Global Affairs, where her work primarily focuses on writing policy papers and framing communications around the topic of immigration.

Sara recently spoke on the phone with guest blogger and fellow linguist, Lauren Johnson, about her winding path, from undergraduate degrees in Communications and Spanish and her early career in the non-profit sector, through her experiences studying abroad and her decision to change degrees (and schools) mid-program, up to her most recent role with the Immigration Initiative. Her story is a great example of how passion and circumstances often combine in unexpected and serendipitous ways.

It all started with high school Spanish.
I loved the way that learning a second language gave me another way of seeing and thinking about the world, and I wanted to major in Spanish as an undergraduate. But I had a professor who suggested that I double major so I wouldn’t starve, so I decided to double major in Communications and Spanish. But I knew I didn’t want a ‘traditional’ advertising career. I was more interested in social justice.

My first jobs were with non-profits, but it was my study abroad experiences that helped guide my career path.
After working in the communications department of a few non-profits, I had the inkling to go back to school, and I enrolled in an internationally focused public service management program. I loved the international aspect, but I realized that I wanted to be more engaged in the day-to-day, doing the work rather than being an administrator.

Linguistics was originally a means to an end.
I had been a part-time volunteer ESL teacher, and was really inspired by the immigrants I met, especially their enthusiasm for learning. I also really enjoyed the cultural exchange aspect. So I started looking at programs in the Chicago area to switch to a TESOL program and found Northeastern Illinois University’s linguistics program. Then in between my public service coursework and my linguistics courses at NEIU I participated in a study abroad program in Chiapas, Mexico, examining sustainable development, and as a side project I worked on indigenous language preservation—in this case Mayan—and I realized that linguistics could be a way to answer the call I felt towards a more service-oriented career.

My thesis was on how the media can shape the immigration debate.
I focused on the case of Elvira Arellano. Her son was a US citizen, and to avoid deportation she claimed sanctuary in a church on Chicago’s West Side. I examined and coded the media mentions of her and her case, looking for how they framed her as a mother, or as “undocumented” versus a “criminal.” At one point most of the surfaces in my apartment were covered with newspapers! But I really began to see that linguistics could be used to help shape and reshape pubic opinion and perceptions, and I was especially interested in continuing to apply linguistic concepts to the immigration debate. My graduate training in the principles of second language acquisition gave me an appreciation for the challenges that face anyone attempting to master a second language, especially in adulthood. This in turn has influenced my work with immigrants, my interest in promoting more inclusive language policies, and my advocacy for bilingual education.

Having a strong base knowledge of semantics has helped to make me a more effective communicator.
I worked full-time while attending grad school, and so I was always looking for ways to apply what I was learning, rather than just focusing on theory. In my current role with the Chicago Council on Global Affairs, which is more of a research-based, think tank atmosphere, I look for ways to offer information and encourage a dialogue rather than giving prescriptive suggestions or focusing on advocacy. And when I was working with the Latino Policy forum, I helped develop a project called the Comment Corps, which uses volunteers to moderate the comments section of articles that talk about Latinos. We asked them to keep an eye out for negative statements and gave them talking points to help balance the comments with facts (you can learn more about the Comment Corp and other similar efforts here.)

Don’t discount your “soft skills.”
I think being an effective communicator is undervalued. Linguists especially have the added skill of understanding how powerful language can be and how interactions can shape perceptions. Many of my coworkers come from more ‘traditional’ degree programs like international policy or political science. But I think there’s a lot of value to bringing together people who contribute different perspectives, beyond what you’d expect.

Communications and linguistics are two very different fields.
Communications is similar to journalism, where you’re taught to objectively tell a story using crisp, colorful copy. You learn skills like how to write a lead and how to construct a story using the inverted pyramid. For public relations and advertising you learn how to be persuasive. But there’s not really a discussion about rhetoric. That’s the gap that linguistics can fill.

I’m really excited by the work being done by the FrameWorks Institute.
Recently, the FrameWorks Institute has conducted research on immigration, focusing on the different phrases being used, and their implications. For example, the negative connotations of immigrants as a “them,” “others,” or “criminals” versus the more positive concepts of the US being a nation of immigrants, or the use of the term “undocumented” versus “illegal.” In fact, advocates successfully got the Associated Press to drop “the ‘i’ word” (i.e. illegal) from their style guide. Obviously, in my current role with the Immigration Initiative this kind of research is highly relevant. We want to promote the idea that immigrants are about maximizing resources and not just an issue of law and order.

For more information about Sara, you can view here LinkedIn profile here. And she has graciously provided a link to her Master’s Thesis, which was published in the Hispanic Journal of Behavioral Sciences, and you can learn more about her work on indigenous language preservation in Mexico here.

This interview has been condensed and edited.

Lauren Johnson is a linguist and theater artist, based in upstate NY. She currently works as a consulting researcher examining humanitarian intervention and violence against women in Darfur, Sudan. A highly accomplished binge reader and trivia buff, she is always accepting recommendations for what to read next.

You can read more about her here: http://plainspokenlinguist.wordpress.com