Over on the CL (Mighty) Network, we have been reading and discussing Adam Grant’s Give and Take, a book that explores how to create work environments that support a culture of giving. What follows is a summary of our first discussion and a plan for the next one.

To join in, head on over to the CL (Mighty) Network.

We started with an appreciation for Adam Grant’s suspenseful way of beginning things off, which is apparently also the way that he begins his classes at Wharton.  To introduce the subject of reciprocity styles in the workplace, he explains that people operate as givers, takers, or matchers and that his research exploring such diverse domains as engineers’ productivity, medical students’ grades and salespeople’s revenue has revealed that the people who consistently show up at the bottom of the success metrics are givers.  He then invites you to guess who might be at the top (spoiler alert if you have not read the book – I am about to give it away!!!!).  We suspect that it might be matchers, and we fear that it might be takers, but …..drumroll!  no, to our surprise and delight the research reveals it to be the givers  – again! 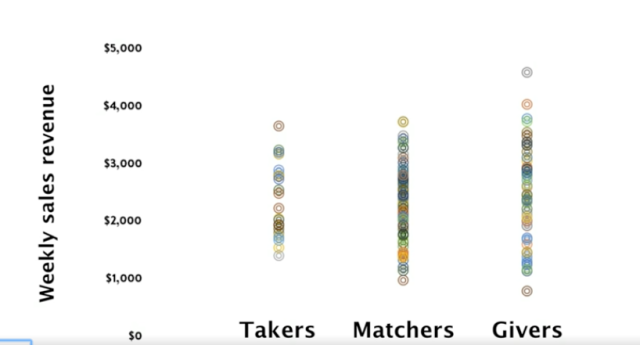 The rest of the book explores why it is that givers are overrepresented both at the top and the bottom, which is even more surprising when you learn that they comprise only 25% of the 30,000 people he surveyed.  Most people interact as matchers in the workplace. He also notes that many who operate as takers are former givers who got burned just one time too many!! 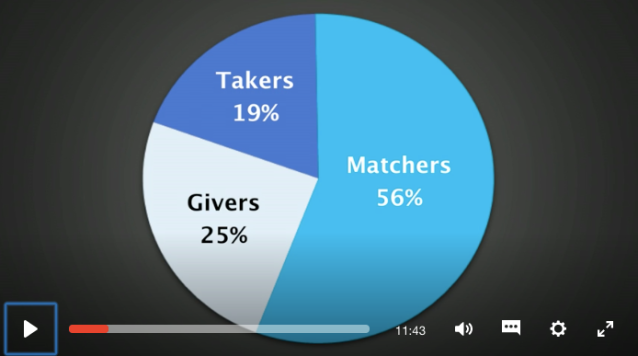 (ha! And as you can see, I grabbed these images from his TED talk on the subject)

So, as it turns out, there are many reasons why we want to promote a giving culture, including that “The greatest untapped source of motivation is a sense of service to others” and that “Focusing on the contribution of our work to other people’s lives has the potential to make us more productive than thinking about helping ourselves.”  Also, we get to live in a world where more people are generous, and I for one want to be a part of making that happen!!!

Some of the group’s favorite ideas from the book:

Some concepts that we thought would lend themselves to a future discussion:

The last chapter of the book, which discusses how giving benefits the group and helps you succeed, is going to be our next discussion. I hope you will join us, even if you can only read this chapter, or have not yet read any of it – folks joined last time who hadn’t read the book and were still able to contribute / get something out of the discussion. Hopefully you can tell that it is really densely packed with ideas, so even just chewing on these is a lot of fun!!

We will meet this Friday, Feb 23rd at 3pm PDT / 6pm EDT (if you are on the east coast, think of this as a happy hour to kick off the weekend)

If you have not yet checked out the CL (Mighty) Network, you are able to try it out for free for a week. And this coming week we have a work session (on Tuesday), a storytelling workshop (on Thursday), and this book club discussion event on Friday!