When I am asked for advice about what to say in a statement of purpose, I say: “show me your city block,” something that shows me a bit about who this person is and how they understand and interact with the world.

As I will explain in this blog post, this advice is informed by different experiences and sources of knowledge, but it is shaped most strongly by one very compelling statement of purpose that I read from a woman who was applying to graduate programs in urban planning. She took her reader through the experience of driving to school when she was a kid growing up in Atlanta, showing us what she saw through the passenger window as she and her mother left her affluent suburb and passed through poverty-stricken neighborhoods. Her struggles to comprehend the disparities that she saw for those few minutes at the beginning and end of every day so impacted her, that they have fueled her passion for study more than 20 years later.

Part of what made her statement of purpose so very compelling was that it contextualized her graduate studies as the first step to realizing a broader professional vision.  As a reader, you could see how this step was just the next logical progression in the expression of her goals.  So as you think about what to say in your own statement of purpose (SoP) here is one site and here another which give good advice on composing a compelling SoP.

But of course she would pick a block, she is an urban planner!
Think of it as a metaphor, but the truth is that everyone sees something different when they are out there in the world, and a city block is as compelling a place to start as any. The point is to think about what you might notice because of who you are, the experiences that you have had and how these have shaped the way you understand the world. 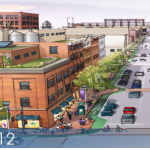 Our ways of seeing are entirely shaped by who we are, what we value, and what we do with our lives. Use the patch of dirt, the city block, or whatever object or experience you chose to talk about to highlight and articulate your passions, your skills, your values.